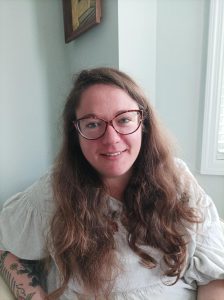 CSUMC is very excited to be sponsoring a talk by French cultural historian, Dr. Camille Moreddu, the John W. Kluge Center’s 2022 Jon B. Lovelace Fellow for the Study of the Alan Lomax Collection at the Library of Congress. Dr. Moreddu, originally from Brittany, France, is continuing her research on French-speaking communities in the Midwest through collections at the Library of Congress and the Mills Music Library here at UW-Madison. Dr. Moreddu will be delving into the Wisconsin Folksong Collection 1937-1946, which is comprised of documentation collected by researchers Sidney Robertson Cowell and Helene Stratman-Thomas. Moreddu will be offering a talk (title and abstract below) about her research on campus, which will take place in Memorial Library, Room 126 on Thursday, April 21st, from 3:30-5pm.

The talk is co-sponsored by the Folklore Program in the Department of German, Nordic, Slavic+, the Mills Music Library, and the Mead Witter School of Music. This event is free and open to the public.

“Vestiges of a Vanquished Frontier: Approaches of French-American Folklore in the Midwest from 1847 to 1953”

The French-American cultural minorities in the Midwest, whether they descend from the Upper Louisiana colonial establishments or from the 19th century Quebec immigrants, differ from other ethnic minorities, having settled and traveled in America before the Revolutionary War and often beyond the Anglo Frontier. Assigning them a place in the US national culture and in the Frontier epic offered both a specific difficulty and a specific motivation to the collectors and scholars that have studied their folk music and culture. We will review a century worth of the resultant collections and discourses.