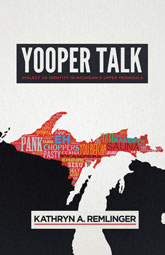 Yooper Talk is a fresh and significant contribution to understanding regional language and culture in North America. The Upper Peninsula of Michigan—known as “the UP”—is historically, geographically, and culturally distinct. Struggles over land, labor, and language during the last 150 years have shaped the variety of English spoken by resident Yoopers, as well as how they are viewed by outsiders.

Drawing on sixteen years of fieldwork, including interviews with seventy-five lifelong residents of the UP, Kathryn Remlinger examines how the idea of a unique Yooper dialect emerged. Considering UP English in relation to other regional dialects and their speakers, she looks at local identity, literacy practices, media representations, language attitudes, notions of authenticity, economic factors, tourism, and contact with immigrant and Native American languages. The book also explores how a dialect becomes a recognizable and valuable commodity: Yooper talk (or “Yoopanese”) is emblazoned on t-shirts, flags, postcards, coffee mugs, and bumper stickers.