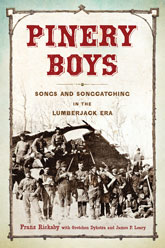 As the heyday of the lumber camps faded, a young scholar named Franz Rickaby set out to find songs from shanty boys, river drivers, and sawmill hands in the Upper Midwest. Traveling mostly on foot with a fiddle slung over his shoulder, Rickaby fell into easy conversation with the men, collecting not just the words of songs, but the tunes, making careful notes about his informants and their performances. Shortly before his groundbreaking and much-praised Ballads and Songs of the Shanty Boy was published in 1926, Rickaby died, leaving later folklorists, cultural historians, and folksong enthusiasts with little knowledge of his life and other unpublished research.

Pinery Boys now incorporates, commemorates, contextualizes, and complements Rickaby’s early work. It includes an introduction and annotations throughout by eminent folklore scholar James P. Leary and an engaging, impressively researched biography by Rickaby’s granddaughter Gretchen Dykstra. Central to this edition are Rickaby’s own introduction and the original fifty-one songs that he published—including “Jack Haggerty’s Flat River Girl,” “The Little Brown Bulls,” “Ole from Norway,” “The Red Iron Ore,” and “Morrissey and the Russian Sailor”—plus fourteen additional songs selected to represent the varied collecting Rickaby did beyond the lumber camps.

Supplemented by historical photographs, Pinery Boys fully reveals Franz Rickaby as a visionary artist and scholar and provides glimpses into the past lives of woods poets and singers.