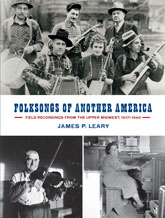 Leary, J. Folksongs of Another America. University of Wisconsin Press, 2018.

America’s Upper Midwest is a distinctive region where many indigenous and immigrant peoples have maintained, merged, and modified their folk song traditions for more than two centuries. In the 1930s and 1940s, Sidney Robertson, Alan Lomax, and Helene Stratman-Thomas—with support from the Library of Congress and armed with bulky microphones, blank disks, spare needles, and cumbersome disk-cutting machines—recorded roughly 2,000 songs and tunes throughout Michigan, Minnesota, and Wisconsin. Spanning dance tunes, ballads, lyric songs, hymns, laments, versified taunts, political anthems, street cries, and recitations, these field recordings—made by people born before or shortly after 1900—were captured at a transformative moment when America was in the throes of the Great Depression, World War II was erupting, and market-driven mass entertainment media were expanding rapidly. Yet, except for a handful of Anglo-American performances, these remarkable field recordings in more than twenty-five languages have remained largely unknown, along with the lives of their mostly immigrant, indigenous, rural, and working-class performers.

Order this book from UW Press. You may also explore the featured Digital Collections database.