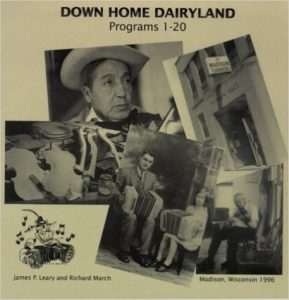 Folklorists Jim Leary and Rick March have distilled a definitive presentation of Upper Midwestern traditional and ethnic music, from Ojibwe drums to Norwegian fiddles, from polka to salsa, from gospel choirs to southeast Asian rock bands. The book is a listener’s guide packed with photos, essays, and resources.

James P. Leary is professor of folklore and Scandinavian studies at the University of Wisconsin–Madison. His books include Yodeling in Dairyland, So Ole Says to Lena, and Wisconsin Folklore. Richard March is Folk and Community Arts Specialist at the Wisconsin Arts Board.

For information on the two-day dances, see Ray Kiska on the Wisconsin Folklore Listener.

Chapter 17: From Maso Pust to Cesky Den: Czech and Slovak Music in Wisconsin

Chapters 21 and 22: Old-Time Music in Stevens Point and Pulaski Is a Polka Town

Chapter 38: The East in the North: Southeast Asian Music in Wisconsin